In recognition of Women’s History Month, today’s post honors the contributions made by Kate Stoneman to the New York legal community and women everywhere.

In 1886, Katherine “Kate” Stoneman became the first woman admitted to practice law in the State of New York. She was also the first woman to pass the New York Bar Exam, doing so without any formal education in law. This groundbreaking series of firsts was not without controversy. Stoneman was initially refused admission to the bar because of her gender. There was “no precedent” for women to be able to practice law in New York. In addition, the Code of Civil Procedure denied women the right to practice. Coincidentally, legislation had been introduced which would remove the gender qualifications from Section 56 of the Code of Civil Procedure a few months before Stoneman was denied. This bill, however, had been stuck in the legislature. Stoneman was able to marshal support and the bill was signed into law within a few short days. Stoneman then reapplied for admission to the bar, which was accepted, and in May of 1886 became New York’s first woman lawyer. Stoneman’s achievement paved the way for thousands of women to pursue a career that was previously unavailable to them.

In 1896 Stoneman enrolled in Albany Law School, and in 1898 at age 57, became the first woman to graduate from Albany Law. Thereafter, Stoneman maintained a law office in Albany for forty years. During this time Stoneman was also a teacher. She graduated from the New York State Normal College in 1866 and proceeded to teach geography, drawing, penmanship and school law at the College for the next 40 years.

Stoneman was also actively involved in the women’s suffrage movement, playing a prominent role throughout her lifetime. She and others formed the Women’s Suffrage Society of Albany and she was an executive board member of the State Suffrage Association. Stoneman participated in efforts to secure suffrage legislation in New York State, and, as a pole watcher, reportedly saw New York women vote for the first time in 1918.

Stoneman has been recognized for her achievements and impact on women’s history. On May 22, 1986, New York Governor Mario Cuomo declared the date “Katherine Stoneman Day,” honoring the 100th anniversary of her acceptance to the bar. In addition, Stoneman was introduced into the National Women’s Hall of Fame in October of 2009. Kate Stoneman passed away in May of 1925 at the age of 84. 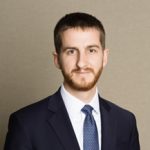 Alec R. Gladd
Associate
845 896 2229 Email
The following materials, and all other materials on this website, are intended for informational purposes only, are not to be construed as either legal advice or as advertising by Cuddy & Feder LLP or any of its attorneys, and do not create an attorney-client relationship between you and Cuddy & Feder LLP. Please seek the advice of an attorney before relying on any information contained herein.