Helping to Shape the Master Plan for Pace University

Hospitals, universities, schools, houses of worship and cultural centers play a vital role in Westchester County and the Hudson River Valley, assuring that our communities are not just beautiful places to live, but also endowing us with a rich quality of life. As our communities grow, it is essential for these not-for-profit organizations to expand as well, enabling them to prepare and scale for the challenges of the 21st century, and grow consistent with municipal plans and the character of the surrounding community.

Serving the needs of not-for-profit institutions has been a central part of Cuddy & Feder’s mission ever since the firm was founded. Our work with Pace University provides a good example of the firm’s practice in this vital arena. With a footprint that extends across large swaths of Westchester and New York City, the 106-year-old university, along with its college, business school and law school campuses, has long been an academic pillar throughout the region. Our firm’s involvement with Pace dates back to the early 1970s when one of our founding partners helped Pace identify property to locate its new law school. That property is just blocks from our White Plains office, and our firm’s name proudly graces the entry hall of one of the law school’s buildings.

[Our] ultimate goal is to approach these development projects as a win-win opportunity for the entire community.

As a recent illustration of our firm’s commitment to institutional and community needs, we were pleased to be present last October, with a large contingent of university officials and community leaders, to celebrate a ribbon cutting for Pace’s new Alumni Hall building as well as its new Environmental Center Complex. 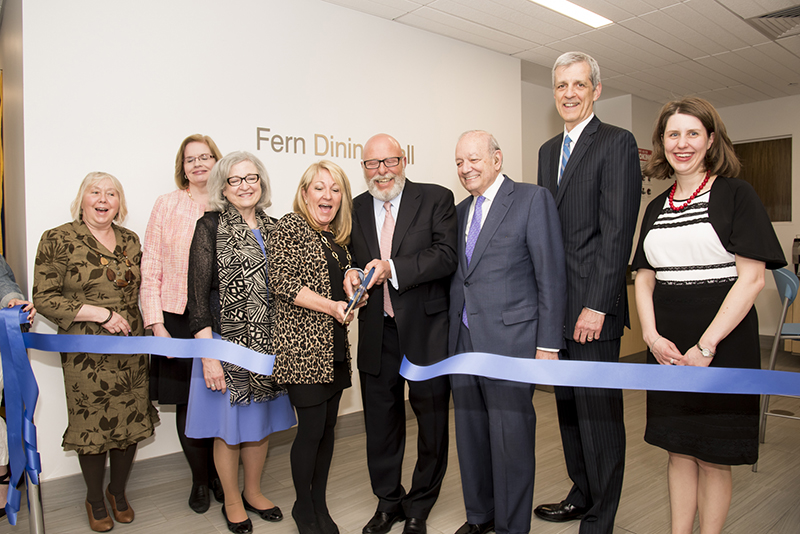 This ribbon cutting ceremony marks the latest chapter in a long-term relationship, as our firm has been working for more than 15 years to help Pace craft, revise and implement its evolving master plan to meet the needs of students, professors and administrators of the University. A long-term planning process is typical of the way that many educational not-for-profit institutions operate, as their master plan strategy takes shape, in response to ongoing fundraising initiatives and constant interaction with the broader community in a competitive academic environment.

Back in 1999, our partner Ruth Roth first got involved representing the University on its Westchester campus in what initially seemed like a limited land use assignment – obtaining permits to build the new Goldstein Academic Center. But as can happen in development of any kind, the residents surrounding the campus’ neighborhood voiced concerns about traffic and Pace’s long term plans. Ruth helped Pace to overcome these and other concerns, paving the way for a beautiful new building and laying the ground work for Pace’s long term planning with the community. Subsequent elements of Pace’s plan took shape and resulted in an expanded and new health and fitness center, along with an approved academic center. Throughout the process, Pace strengthened its ties with the surrounding community, opening its doors to residents and local police and fire rescue officers to enjoy the campus and new recreation facilities.

“Land use can be a delicate process that requires more than just having strong relationships with community officials,” says Ruth, as she explains the way she approached this assignment. She, herself, had previously worked in municipal government, so she understands the need for effective communication in this context. “It’s about learning to work with the community, sharing information that will keep them positively engaged and accepting community input as a critical part of the equation.” Realizing that the neighbors were most concerned about the size of the student population, Ruth reassured them with the facts about Pace’s plans, demonstrating they would not result in additional impacts to the broader community. “This is what helped to gain their support,” Ruth explains.

Those improved relations turned out to be invaluable as the University’s master plan process moved to a new, potentially more challenging phase. The University’s operations in Westchester County had long dealt with a somewhat physically disconnected student population as a natural result of students living on two separate, but nearly adjacent campuses – a 199-acre campus in the Town of Mount Pleasant, and a smaller 35-acre campus in the nearby Village of Briarcliff. Not only did this arrangement require Pace to provide daily bus service to shuttle students back and forth throughout the day as well as a duplication of services and excessive maintenance costs on two campuses, but it also made it more difficult to establish a truly unified residential campus environment. So, as Cuddy & Feder’s Land Use Attorneys got started in 2012 on the next round of revisions to the University’s master plan, the key strategic objective entailed a much more ambitious consolidation of the two campuses into a single thriving facility delivering on Pace’s motto – Oportunitas.

The plan included many new buildings – dormitories, Alumni Hall, an environmental center, an observatory and other facilities. Some buildings would be erected in the short term and some in the distant future. Cuddy & Feder’s Land Use team had to consider every possible future need of the University because the officials of the Town of Mount Pleasant had firmly stated that they wanted to see a master plan so that a comprehensive evaluation could be made and implemented as part of phased improvements at the campus. Once again, there were complicated competing interests to be balanced between the University and the surrounding community. Ruth and her partner Chris Fisher ultimately had to gain approvals and be reviewed by numerous agencies, including the Town Board, the Town’s Planning Board, Zoning Board of Appeals, Engineering Department, Building Department, as well as the New York State Department of Transportation, New York State Department of Environmental Conservation and the U.S. Army Corps of Engineers.

In consolidating the facilities, extensive redesign of the Mount Pleasant campus would be necessary, with the campus’ long internal driveways and roadways being reconfigured to facilitate the creation of a real campus quad, as well as extensive building renovation and facility upgrades. One of those major renovations took place at Pace’s Kessel Student Center which was expanded with a new dining hall and student lounges. This building is part of the new quad, which works to create a cohesive campus center. Meanwhile, from the community’s point of view, it remained essential to accomplish all of this, without increasing congestion or density in an otherwise bucolic residential neighborhood.

Notwithstanding the expanded scope and complexity of the new master plan revisions, Cuddy & Feder was able to build on its prior experience and help guide Pace through the planning and permitting process in a much shorter time frame – just 18 months from submission to approval – even though the process this time included a more extensive environmental impact study and required input from a team of architects, urban planners and environmental engineers.

“You learn and benefit by experience,” explains Ruth about the firm’s continuing representation of Pace University. “We fundamentally believe we can do a better job as lawyers by helping clients such as Pace foster a positive relationship with surrounding towns and villages. The ultimate goal is to approach these development projects as a win-win opportunity for the entire community.”